Valhello is a MUD: a multi user dungeon. MUDs are text-based games with extremely simple interfaces where users usually type in the commands they want to do. Let's build one that's blockchain-assisted and explain what that even means.

Here is a screenshot from an old MUD. 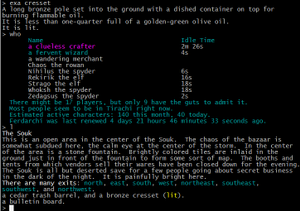 Valhello is one such MUD, but with a twist: the characters and items you obtain in the game can be moved to the blockchain and sold to others, long after the game has stopped existing. They can even be reused in other games. Additionally, Valhello uses the blockchain for cheat prevention.

The world of Valhello is of the Norse mythos, similar to that of Marvel's Thor universe - so a mixture of science fiction and medieval / Viking-age themes.

The starting zone is Asgard, where the player starts out as a lowly Viking and desires to climb the ladder of awesomeness in order to gain a ticket to Valhalla. Valhalla can, of course, only be entered through death by combat of sufficient prowess.

In a nutshell, you level up your character enough to fight epic monsters (in order) and the higher the level of the monster that kills you, the bigger the feast you're thrown as you enter Valhalla, and the more leaderboard points you get in addition to next-character bonuses.

If you're killed by a low level creature or you transgress and murder a fellow Viking, your fame is forsaken and the spirits of all your predecessors are exiled from Valhalla and cast into Hellheim to be forgotten forever.

Naturally, you can collect items, upgrade your skills, or just idle around and talk to your co-Vikings.

A player can exit a game (pause it for their character) by Summoning a Valkyrie which transports them to Asgard. While in Asgard, no harm can befall a Viking. 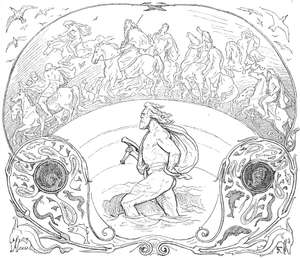 The zones players can travel to through the Bifrost portal are of two types:

In common zones, players enter and leave at will. In instanced ones, they party up and enter a zone together which is unique to them - another team entering the same zones gets a copy of that zone. This is to keep zones replayable. We'll weave it into the storyline as some kind of proving ground timeloop.

Blergh. The blockchain. Again that word. Everyone's talking about it and it feels like a scam on top of another scam, right?

The blockchain has many uses, but most of those you've heard of are not it. The problem with blockchain is that most of the people who advertise it have no idea why they need it, or know full well that they don't - that's why they advertise. Those with legit use cases build and let the results speak for themselves.

So how does the blockchain help Valhello?

Easy, fella. We're not there yet. For now, follow the posts we're putting out. We have an RSS feed, a Twitter, and some Github repos. Until then, read the next few posts about the tech behind the game.